Effect of angiotensin/neprilysin inhibition on ventricular repolarization and clinical arrhythmogenesis

T wave peak to end (Tp-e) interval is new marker for ventricular vulnerability for arrhythmias and repolarization variability [3, 4]. A prolonged Tp-e interval represents a period of potential vulnerability to re-entrant ventricular arrhythmias. It also has been associated with increased risk of mortality in the congenital and acquired long QT syndromes [5], in structural heart diseases such as hypertrophic cardiomyopathy [6] and mitral valve prolapse [7] and also in coronary heart disease patients such as undergoing primary percutaneous coronary interventions for myocardial infarction [8] and coronary ectasia [9].

Study was designed as a prospective observational fashion. Patients who admitted to Samsun Training and Research Hospital Outpatient Heart Failure Clinic and prescribed Sacubitril/valsartan were enrolled. Exclusion criteria were: absence of ICD, ventricular pacing percent >40% or pacemaker dependent, presence of cardiac resynchronization therapy, left ventricle ejection fraction higher than 35%, NYHA class lower than 2, left and/or right ventricle hypertrophy, left or right bundle branch block, QRS > 120 milliseconds on surface electrocardiogram (ECG), atrial fibrillation, ECG recordings that are insufficient for measurements, use of class I or III antiarrhythmics, having end stage renal of hepatic failure, not being on guideline directed optimal medical therapy for heart failure. Patients who were on guideline directed optimal medical therapy for heart failure were defined as:

From January 2017 to January 2020, 265 patients, who were on regular follow up at Samsun Training and Research Hospital Outpatient Heart Failure Clinic, were validated for study. After exclusions, remaining 76 patients were enrolled and analyzed (figure 1). As a general rule, all patients’ RAAS inhibitors were stopped before Angiotensin Receptor/Neprilysin Inhibitor (ARNI) initiation and started with low dose (24/26 mg) for two weeks and then titrated to the maximum dose if tolerated. All patients’ index (just before ARNI initiation) and follow up (at 9th month of ARNI initiation) ECGs and echocardiograms (ECHO) and ICD interrogation reports, blood chemistry and full blood count records, medications were obtained. The local institutional ethics committees reviewed and approved the study protocol. All procedures were carried out in accordance with the Declaration of Helsinki (2000). 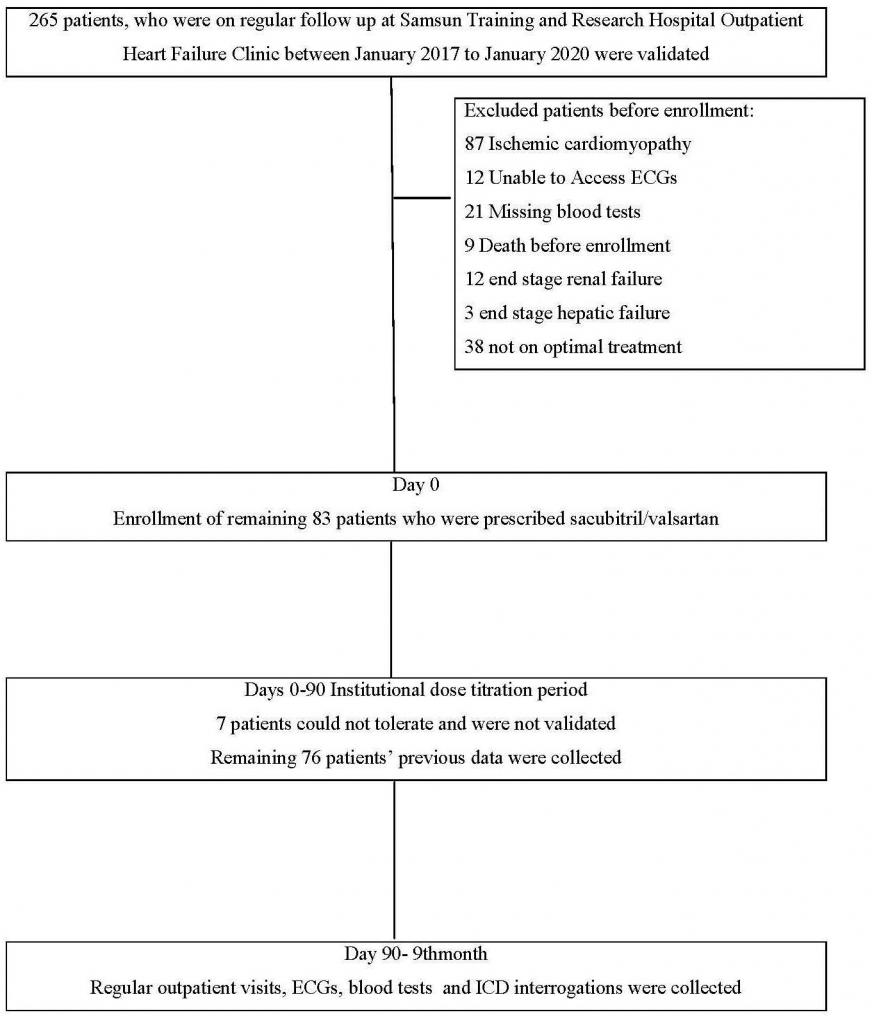 A 12‑lead surface ECG (Nihon Kohden Corporation, Cardiofax M Model ECG-1250, Tokyo, Japan) was performed in the supine position, with a 25 mm/s paper speed and a voltage of 10 mm/s, at the beginning of the therapy and on the 9th month. All of the ECG papers were scanned and transferred to the digital media, and the digital records were analyzed under ×400% magnification in a personal computer.

Patients having U wave and biphasic or negative T wave were excluded. Measurements were performed by two different cardiologists who were blinded to the patient data via using software after ×400% magnification. The QT interval was measured from the beginning of the QRS complex to the end of the T wave and also corrected QT (QTc) was calculated by using Bazett's formula (QTc = QT/ RR interval) [10]. Tp-e is measured from the peak of the T wave to the end of the T wave and it was performed from the precordial leads and an average value of at least two readings was calculated for each lead and measurement. QTc intervals were obtained using Bazett's formula (QTc = QT/RR−2). Then, Tp-e, Tp-e/QT, Tp-e/QTc were calculated.

All measurements were taken separately by two different cardiologists who were blind to the clinical and laboratory signs of the patients, and the mean values were transferred to database. The interobserver and intraobserver coefficients of variation were 3.2% and 2.4%, respectively.

A complete transthoracic echocardiography study was performed using the GE Vivid E95 ultrasound system, with a frame rate of more than 60 frames/sec, before starting LCZ696 and at 9th month of therapy.

All patients’ ICDs were interrogated with manufacturers’ device routinely. Interrogation reports at least six months before and nine months after therapeutic intervention were obtained from routine device follow up. If there were any shock applied by device, number of shocks were noted and electrograms were printed and kept for further analysis.

Our findings demonstrated that Sacubitril/valsartan therapy, on top of guideline directed optimal medical treatment, improves Tp-e related indices on surface ECG. Another important finding is, there was a significant decrease in appropriate ICD shocks during the Sacubitril/valsartan treatment period. It is plausible to suggest that positive effect on repolarization may lead to an arrhythmic improvement.

QT interval is a rather dynamic course that is the sum of ventricular depolarization and repolarization duration. Many factors such as electrolyte imbalance (potassium, magnesium, calcium), acidosis, several genetic diseases, drugs, and accompanying heart diseases contribute to changes in QT interval [17, 18].  Recent studies indicated that Tp-e interval, which is the interval between the peak and the end of T wave on ECG can be used as an index of total (transmural, apico-basal, and global) dispersion of repolarization [19, 20] Also, increased Tp-e interval might be a useful index to predict ventricular tachyarrhythmia and cardiovascular mortality [21-23]. Recently, a new index, the Tp-e/QT ratio has been suggested to be a more accurate measure for the dispersion of ventricular repolarization compared to QT, QTc and Tp-e intervals which is independent of alterations in heart rate [24]. Changes in these indices are frequent in many cardiac diseases and show increased susceptibility for ventricular arrhythmias  [25, 26]. Our main finding was significant decrease in Tp-e interval and Tp-e/QT, Tp-e/QTc after switching with sacubitril/valsartan combination (Table 2).

In their study Sen et al. [27] demonstrated that Tp-e interval length and ischemic etiology for heart failure were independent predictors of appropriate shocks in patients who underwent ICD implantations for primary protection. De Diego et al. demonstrated that Angiotensin-neprilysin inhibition decreased ventricular arrhythmias and appropriate ICDs shocks in heart failure with reduced ejection fraction patients under home monitoring as compared to angiotensin inhibition [28]. To our knowledge, the relationship between decrease in appropriate ICD shocks and novel repolarization indices Tp-e interval and Tp-e/QT ratio, are not studied in ARNI treatment before. We demonstrated that there was a significant decrease in appropriate ICD shocks when we compared preceding six months with next nine months after maximal tolerated ARNI initiation. Relatively small number of patients and also in our study prevented us to analyze if there was a relationship between Tp-e interval shortening and the decrease in appropriate ICD shocks. On the other hand, total number of ICD shock events were also very few for establishing a correlation.

In the presence of heart failure, enlarged myocardial tissue leads to elevated systolic wall stress. Consequently, left ventricle electrical heterogeneity occurs because of myocardial degeneration and fibrosis. Therefore, increased prevalence of ventricular arrhythmia is a reason of instability of heart muscle [29, 30]. One may notice an increase in ICD shocks in patients with worsening heart failure and this is also an objective sign of poor prognosis. Although ICDs are cornerstone elements therapy for prevention of sudden cardiac death in heart failure, increase in appropriate or inappropriate shocks is related to increased mortality. Sacubitril/valsartan combination significantly decreases not only total mortality, but also sudden cardiac death in heart failure patients. Underlying mechanism for this effect is still unknown. However one can argue about the importance of drug’s role in regression of fibrosis and remodeling process. One of the most favorable results of this effect is the improvement of cardiac output. Our results put forward that there was a significant increase in cardiac output after initiation of sacubitril/valsartan which is also significantly correlated with improvement in Tp-e and related repolarization parameters. Another important factor is, elevated natriuretic peptide levels are related with and independent predictors of sustained ventricular arrhythmia and ICD shocks. Although we do not have pre and post treatment serum natriuretic peptide levels, studies show a decrease of natriuretic peptides with sacubitril/valsartan combination [31].  One of other hypothetical mechanisms may be the decrease of myocardial wall stress by vasodilatation and diuresis. In addition, inhibition of RAAS leads to inhibition of symphatic system which plays major role in genesis and sustenance of malign ventricular arrhythmia.

Previous studies demonstrated the relevance of optimal medical therapy to clinical outcomes such as sudden cardiac death and ventricular arrhythmias [31]. In this observational study, sacubitril/valsartan was used according to international guidelines [32]. All patients were taking a RAAS inhibitor, which consequently was changed to ARNI. Among the patients, 100% took a beta blocker and 100 % an MRA before and after ARNI. Of note, use of MRA in our study was significantly higher than in other relevant trials such as PARADIGM-HF (55%) [2] and DANISH (DANish randomized, controlled, multicenter study to assess the efficacy of Implantable cardioverter defibrillators in patients with non-ischemic Systolic Heart failure on mortality) (58%) [33]. Therefore, our population was previously well treated in terms of medical optimal therapy, which highlights the relevance of our observed ventricular arrhythmia reduction after the addition of sacubitril/valsartan. Additionally, after sacubitril/valsartan, patients had a significant improvement of NYHA functional class and left ventricular ejection fraction.

Main limitation of our study is the prospective observational design. This forced authors to bound real life outpatient clinic routines and institutional rules which make difficult to obtain data in a wide spectrum. For example, this is the main cause of absence of pre and post treatment serum natriuretic peptide levels. Another limitation is the noninvasive measurement of cardiac output by echocardiography. Nonetheless, we think that is a safe and fast way to use echocardiography for determining contractility during patient follow up.  Relatively short follow up period is one of remaining minor limitations. Also low number of participants is a limitation and brings out the need for larger trials to generalize our results.

In our study, switching RAAS inhibitor with ARNI was associated with increase in left ventricle performance and decrease of sustained ventricular arrhythmias and appropriate ICD shocks. These positive findings are also reflected by improvements in surface ECG changes such as Tp-e and related indices.

Current study was not funded by any governmental or industrial agency.